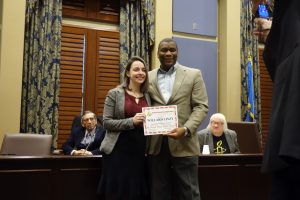 “Everyone has the right to take part in the government of his country, directly or through freely chosen representatives.”

–Article 21 of the Universal Declaration of Human Rights

Willard Linzy is a living example of Article 21.

Mr. Linzy has been a community activist in northeast Oklahoma City for more than 20 years. He has advocated for improved quality of life issues relating to poverty, education, healthcare, church and ethnicity values within the African-American community in OKC.

For more than 25 years, Willard has been a youth mentor with the Brotherhood Association of America Development Inc. He formed the Oklahoma Central Region Interdisciplinary Steering Council in 1995 as an effort to foster community rebuilding. He continues to work with commitment towards “Building a More Benevolent Community,” and this effort has been expanded to reach into communities throughout the Caribbean and across the continent of Africa.

Willard stood for election to the Oklahoma House of Representatives in 2006, 2008, 2012 and 2014. Though he didn’t win, he takes part in our government as an actively engaged citizen.

He is a talented musician, and he is an active volunteer with the Oklahoma Universal Human Rights Alliance.

How do they help to define the meaning of Human Rights where we live?

BIOGRAPHY:
Willard Linzy has two adult children, a son and a daughter. He was born in Oklahoma City and attended public schools. His earliest interest as a child focused on law enforcement and community development. During his high school years he participated in the Oklahoma City Police Explorers Post and rose to the ranks of Chief, serving three consecutive terms. He studied piano as a child and through his sophomore year at the Univ. of Oklahoma in Norman, OK while serving as youth minister of music and organist at the church of his youth. He served fifteen years as benevolence ministry leader and deacon for the Britton Road Church of Christ and two years as a deacon for the Garden Oaks Church of Christ.

He completed undergraduate studies at Central State Univ. in Edmond, OK while pursuing a career in law enforcement with the Oklahoma Dept. of Human Services and later transferred to the social work division. In 1992 he accepted his first appointment in the areas of public finance as a fiscal analyst with the Oklahoma Office of State Finance serving under the administration of both Governor David Walters and Governor Frank Keating. For a short time afterward he served as finance officer for the Office of the Oklahoma State Attorney General and then served as the disaster financial manager for the Oklahoma Department of Emergency Management, the state companion agency to FEMA. After twenty-six years of state service, he turned his focus towards community and economic development through his private sector commitment and his candidacy to become a member of the Oklahoma State House of Representative. He ran unsuccessfully in 2006, 2008, 2012 and 2014. He is a licensed insurance agent with Allstate as an Employee Benefits Specialist and works with employers to address the needs of their uninsured & under- insured employees in the workplace.

In 1993 he began volunteer service as a mentor with the Brotherhood Association of America Development Inc. which is a youth mentoring organization “Where African American Young Men Become Leaders” and as an answer to the question which he raised regarding “who will they lead?”, he formed the Oklahoma Central Region Interdisciplinary Steering Council in 1995 as an effort to foster community rebuilding within the Greater Oklahoma City areas. He continues to work with commitment towards “Building a More Benevolent Community” and this effort has been expanded to reach into communities throughout the Caribbean and across the continent of Africa.

Involvement with various youth music programs within the community, particularly northeast Oklahoma City. Gained insight into types of conflict experienced within the scope of religion by young aged children and provided guidance through means of informal counseling.

*Participation in several initiatives related to minority elderly programs, both statewide and locally.