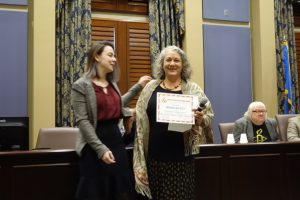 One of the first recipients of the award was Dr. Clyde Snow – a world-renowned forensic anthropologist from the University Oklahoma. Many of you are familiar with Dr. Snow’s legacy.

Many people are carrying on in the tradition of Dr. Clyde Snow – including this champion, Dr. Misha Klein.

Presently, she works at the University of Oklahoma, where she chairs the Clyde Snow Social Justice Award. We’re happy that she has made Oklahoma her home.

Misha Klein is increasingly called upon to speak at events related to human rights and social justice in Oklahoma. Partly this is because she is a good speaker. More than that, though, she knows what she is talking about. She does brilliant academic research on social justice and minority rights. As chair of the Clyde Snow award, she has hosted human rights champions from around the world – including from Chile, Bosnia, and Myanmar.

We appreciate our friends at the University of Oklahoma, and we are pleased to recognize the good work of Dr. Misha Klein and the Clyde Snow Social Justice Award Committee.

Through her research and her active role in the Center for Social Justice at OU, Klein is increasingly called upon to speak at events related to human rights and social justice in Oklahoma. These have included a 2018 symposium on “Dislocations and Migrations” at the Gilcrease Museum in Tulsa, and being a featured speaker at OU campus vigils following tragic events, such as the 2015 massacre at the Emanuel African Methodist Episcopal Church in Charleston, SC; the Unite the Right Rally in Charlottesville, VA; and the 2018 massacre at the Tree of Life Synagogue in Pittsburgh, PA. In 2018 she was invited to co-facilitate a session on anti-Semitism at the annual Teach Out on Race on the OU campus, and in 2019 she was invited to give the keynote address at the Teach Out on Race.

Most significantly, since 2013 Klein has been the Chair of the Clyde Snow Social Justice Award Committee at the Center for Social Justice at OU. This award honors the legacy of Dr. Clyde Snow’s human rights work (Dr. Snow was a 2012 OKHRA awardee) and supports the efforts of human rights activists around the world. As chair, Klein has overseen the nomination and selection process for the award, and coordinated and hosted the visits of the awardees, who so far have come from Chile, Bosnia, and Myanmar. While in Oklahoma, awardees meet with students, give public presentations about their work, and receive the award at a banquet in their honor. This year, Klein spearheaded a new lecture series, bringing the director of UC Berkeley’s Human Rights Center to give the inaugural Clyde Snow Memorial Lecture. The Committee is now working with local social justice and human rights groups to extend these efforts beyond the OU campus and include the larger Oklahoma community.