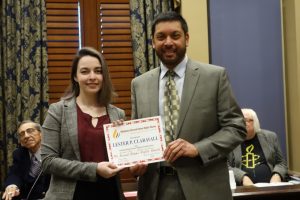 In the Universal Declaration of Human Rights, the nations of the world have agreed that the rights of children have special significance. They have a right to an education, and they have a right to be free from exploitation. This is especially true in terms of child labor — which is regulated by international law.

Where we live, in Oklahoma, there is one individual who — more than anyone else — is recognized as a champion of workplace standards for young workers. He is Oklahoma’s only full-time child labor officer, covering all 77 counties.

Lester Claravall has worked for the Oklahoma Department of Labor for more than 22 years.

Lester has gained recognition for his innovative outreach and educational efforts. He has been invited to speak at national and international conferences in Europe, Africa, Asia, and North America. He was elected and served two terms as the national president of the Interstate Labor Standards Association.

As ILSA president, Lester helped to organize the organization’s first-ever panel on Human Trafficking — including experts from the U.S. Department of Labor and the FBI.

Lester is a volunteer member of the Oklahoma Human Trafficking Task Force. As a task force member, he has trained with the Oklahoma City Police Department.

He has earned many awards for his efforts.

Congratulations to Lester Claravall – another winner of the 2019 Oklahoma Human Rights Award.

Through his public service at the state, national and international levels, Oklahoma’s Lester Claravall has been a strong advocate of Article 4, Article 23, and Article 26 of The Universal Declaration of Human Rights. He has traveled throughout the United States and throughout four different continents to protect the rights of a child, something Claravall has held very near and dear to his heart spanning more than two decades.

Claravall, a public servant for the State of Oklahoma for more than 22 years, has made it his life’s work to protect the rights of workers, in particular, youth workers under 18 years. As Oklahoma’s only full-time child labor officer covering all 77 counties of the state, Claravall works with educators to keep students in attendance at school via the work permit and safe at work through enforcement and educational outreach efforts with employers. He travels the state to ensure that youth are protected against workplace abuse, endangerment, exploitation, and hazardous occupations.

To help protect the rights of all Oklahoma teens in the workplace, Claravall created first-ever publications, partnerships and programs to educate students about the youth employment laws and young worker safety. He also developed Oklahoma’s national award-winning youth employment game called Paying Attention Pays and nationally recognized video contest for teens called Speak Out for Workplace Safety. In addition, he was a team player in the nation’s first “Mainstreaming OSH into Education” law (SB 262) in efforts to reach teens and teach them about worker rights before they transition into their first jobs. In addition, Claravall was a member of the National Young Worker Health and Safety Network credited for successfully reforming the federal child labor laws under the Fair Labor Standards Act in Washington, D.C. and increasing protection of youth in the workforce. Claravall is a frequent speaker at different statewide events and school programs to reach employers, educators, parents, and teens.

Claravall served as president of the Making The Grade Youth Employment Task Force where he worked with teachers and educational institutions to provide scholarships to deserving high schools students in efforts that they will further their education. He also served as chair of the Central Oklahoma Workforce Investment Board Youth Council to help at-risk youth and out-of-school youth further their education and transition into safe jobs. He also served a year on the Oklahoma Safety Council Board of Directors and 10 years on the Interstate Labor Standards Association (ILSA) National Board of Directors.
According to the International Labor Organization (ILO), occupational safety and health (OSH) is a basic human right. In 2011, Claravall served as a co-leader and rapporteur at Creating Safe Futures, a global event put together by the ILO, World Health Organization, United States Department of Labor (USDOL), and National Institute for Occupational Safety and Health (NIOSH). Claravall helped lead the discussion on ways countries can raise awareness and social mobilization for identifying and preventing hazardous work by children and youth at the community level. In addition, Claravall worked with the ILO on a written report summarizing Creating Safe Futures to educate countries around the world on how to keep working children safe.
In 2012, the ILO invited Claravall to the ILO International Training Center in Turin, Italy, to discuss how countries can extend the reach to children and provide the tools necessary to teach them about OSH. The event was put together by the ILO, NIOSH, International Social Security Administration, and European Network Education and Training in Occupational Safety and Health (ENETOSH). This led to Claravall being invited to be a part of the international working group on the Whole School Approach, a lifelong learning process to educate youth from K through 12th grade and beyond on the core competencies of workplace safety.

In 2014, Claravall presented jointly with ENETOSH at the World Congress for Safety and Health in Frankfurt, Germany. The discussion focused on how the world of work, education, and community, can come together to ensure young workers are protected in the workplace. Since the World Congress, Claravall has traveled throughout four continents to speak at international conferences across Europe, Africa, Asia, and North America and share his expertise with other nations globally.

In 2019, Claravall was one of only three safety experts from the United States invited to OSHAfrica, Africa’s first pan-African conference on OSH. Countries across the continent of Africa and around the globe came together to discuss existing challenges on OSH. This historic event brought African countries together for the very first time to help prevent workplace injuries and fatalities and to keep the rights of workers at the forefront. After OSHAfrica, Claravall spoke at the Vision Zero Summit in Helsinki, Finland. As one of the international speakers, he overviewed the importance of Vision Zero, an international movement for employers to reduce work-related injuries and fatalities down to ZERO!

Over the years, Claravall has been a strong advocate against human trafficking and labor trafficking. He authored Oklahoma’s first-ever youth peddling safety awareness poster and brochure as a way to educate teachers, parents, and teens about the dangers of door-to-door selling often times associated with labor trafficking of children. Claravall has also traveled throughout Oklahoma as a speaker on the topic of labor trafficking to educate the general public about this modern day slavery of children. As one of the nation’s leading experts on youth employment, Claravall wrote an article that the Associated Press (AP) picked up. That story Claravall authored went viral and brought much needed national attention to the dangers of traveling youth sales crews. Many local newspapers and local news channels across the United States published the story. Locally, Oklahoma’s KWTV News 9 did a story and interviewed Claravall on the dangers of door-to-door selling ranked one of the most dangerous jobs in the United States for youth.

Claravall, who served two terms as national president of the Interstate Labor Standards Association (ILSA), a network of labor officials from each of the 50 states and several countries, used his leadership to create awareness to the national problem of human trafficking and labor trafficking. During his second term as national president, Claravall worked closely with the USDOL and the United States Department of Justice (FBI) to organize ILSA’s first-ever Human Trafficking Panel comprised of national experts from the USDOL and the FBI. The ILSA national training in Oklahoma City enabled each of the states in attendance to gain a better understanding of this illegal activity and provided resources for the states to take back home in efforts to address the national problem.