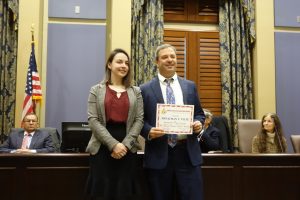 “Everyone is entitled in full equality to a fair and public hearing by an independent and impartial tribunal, in the determination of his rights and obligations….”

That’s Article 10 of the Universal Declaration.

Basically, if there is any contention about your rights, you are entitled to a fair and public hearing in a court of law.

In Oklahoma, there is no doubt that we have contentious issues from time to time. This is especially true with our complex history of land runs, removals, Jim Crow laws, and oppression of all kinds.

Fortunately, there are courts of law.

And there are attorneys who are willing to serve as advocates for people whose rights are in contention.

Today, we are recognizing a champion of this right to a fair and public hearing – Jonathan Velie, an attorney from Norman.

The Velie Law Firm became an advocate for the Seminole and Cherokee Freedmen of Oklahoma.

Velie filed litigation against the United States and tribal leaders in behalf of freedmen to enforce their rights to citizenship and equal access to participate in tribal programs in accordance to the Seminole and Cherokee treaties of 1866.

Mr. Velie’s efforts resulted in a landmark, consequential decision — the restoration of tribal membership for the Seminole and Cherokee freedmen.

For his support of basic human rights, we are pleased to honor Mr. Jon Velie.

The Velie Law firm (formerly Velie & Velie) filed litigation against the United States and tribal leaders in behalf of freedmen to enforce their rights to citizenship and equal access to funds or participate in tribal programs in accordance to the Seminole and Cherokee treaties of 1866.

Few attorneys were willing to take such a case because damages were not allowed even when such cases were won and the potential loss of other tribal clients.

Many persons are unaware that the five so called “Civilized Tribes” (Cherokee, Creek, Seminole, Choctaw and Chickasaw nations) – which were called civilized because they kept persons of African ancestry as permanent slaves, allied with the confederate states at the beginning of the civil war largely to keep persons of African ancestry permanently enslaved. At the end of the Civil War, the Cherokee, Seminole, and the Creek nations signed agreements which guaranteed persons of African ancestry legally living within their tribal reservation at the beginning of the Civil war citizenship in the tribes. At that time, there were no dual citizenships so far as being recognizing them as members of the United States and members of Indian tribes; members of the Five “civilized” Indian tribes did not gain U.S. citizenship until an act of congress was passed in 1901.

The legal work done by Mr. Velie and his firm purpose was not only to assist the Seminole and Cherokee freedmen descendants to retain their tribal membership (The department of Interior eventually assisted by taking the side of both the Seminole freedmen and the Cherokee freedmen in federal court which asserted that citizenship is not only their legal right based on 1866 treaties and the 13th amendment to the US constitution, but that freedmen should also retain their historic and cultural identity. Also that these three tribes must allow them to exercise the rights of citizens which includes rights to vote, hold office, and obtain federal and tribal services including health services at tribally or federally run clinics and hospitals, education (scholarships and attendance at tribal colleges for minimum costs for members of federal tribes, school supplies), and housing benefits including low down payments and rental assistance available to members of federally recognized Indian tribes.

Mr. Velie’s efforts resulted in the restoration of tribal membership for the Seminole and Cherokee freedmen who have been able to stop or slow down the rewriting of their history which had begun to occur after the explosion of tribal gaming – false histories which implied that freedmen as well as the 1866 treaties had been “forced on the tribes” – which even racist Dixicrats such as Senator Strom Thurmund and Governor George Wallace had never implied that the southern blacks who they wished to keep as second class US citizens had been “forced on the people of South Carolina and Georgia”.

Most of the Seminole and Cherokee freedmen people are of modest means – the majority living in the state of Oklahoma – a place in which blacks including freedmen tribal members had few opportunities for advancement after Oklahoma statehood due to Jim Crow laws affecting persons of any amount of African ancestry and before the passage of the Civil Rights Act of 1964. These freedmen were unable to raise hundreds of thousands of dollars to enforce their legal rights. Tribal members of non-African descent were legally white and not subject to the Jim Crow laws which were passed against blacks immediately after Oklahoma statehood. Tribal leaders “disregarded” the contributions of the black tribal members and many worked to deprive freedmen of their citizenship rights and or make them third class citizens when tribal governments gained more money through economic ventures especially after gambling/gaming was allowed.

The legal work that Mr. Velie did for Seminole Freedmen was done pro bono however the work that he did for the Cherokee Freedmen tribal members was done at a low rate (low bono). Mr. Velie and his firm expended more than $500,000 in free legal hours on behalf of the Seminole freedmen and the legal battle lasted more than eight years. The Cherokee freedmen and their supporters raised less than half of the more than $600,000 of legal time spent by the Velie law firm and this battle took more than 14 years. Federal laws are such that even when a case is won, both parties are responsible for their own legal fees unless there are specific statutes saying otherwise… and there are no such statutes allowing the awarding of legal fees or damages to individuals who win in discrimination cases in which the party performing the discrimination is a tribal leader and or the tribe since tribes are immune to provisions of the civil rights act of 1964.

The loss of the uncollected legal fees has had a severe impact on Mr. Velie, his wife and his children. He mortgaged his home three times due to his unpaid work on cases wherein he fought to uphold the rights of individual tribal members. He also lost tribal clients – who opposed him representing freedmen tribal members in federal court. He had very early in his career contracted to develop a business plan for the Chickasaw nation – when the Chickasaw nation found out that he had taken on Freedmen tribal members for clients, they told him they would not pay him the $25,000 they owed him and would not have to pay him because they were a sovereign nation; they have however continued to use his business plan and have become the wealthiest, most powerful and well connected Indian tribe in the United states.

Many persons are unaware that tribal governments receive grants from the United States government to hire attorneys to protect the tribe and tribal officials and in the case of the Cherokee and Seminole tribes can use moneys from casinos to supplement litigation costs. Individuals such as freedmen have no such sources of money. Grants are almost impossible to find because most foundations see the fight by freedmen to uphold their treaty rights as “two non-white minority groups fighting each other” and not the same type of discrimination as when tribal members or a tribe file lawsuits against the United States (for example the Cobell lawsuit which dealt with individual tribal members filing against the United states over an accounting of trust assets).

The tribal disenrollment cases are often drawn out (ie: in the Cherokee freedmen case, the tribe filed several similar motions to dismiss and or move the case perhaps hoping the freedmen or their attorneys would walk away), and the tribal officers or the tribe have almost unlimited amounts of money to pay their attorneys – experienced skilled Indian lawyers are very hesitant to take cases involving freedmen and other disenrolled individuals and in both the Cherokee and Seminole Freedmen cases, the cases required going not only to Federal district court but also to the Federal Appeals Courts.

Mr. Velie also fought in court to reverse dis-enrollment actions which were taken by other tribes including the Pechanga Indians.