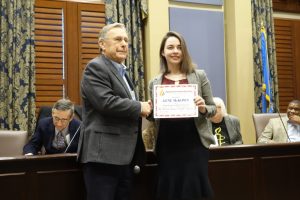 Gene McKown has lived in Oklahoma his entire life and made Norman Oklahoma his home for decades. Gene founded a company called Ideal Homes in which he helps people achieve the American dream; to own their own home.
If you ask anyone in Norman about charity work or philanthropy, the first name that will come to mind is Gene McKown. Gene has given millions of dollars of his own money but also helped a wide range of charities be successful by encouraging the community to be generous as well.

Gene and his family are known for their dedication to service each involved with a wide range of charitable organizations from United Way, to the arts to Food and Shelter.

In 2015, Gene McKown heard a message at church about not waiting another minute to do what’s on your heart. Gene had been trying to figure out how he could better serve those in need. After hearing that message, Gene walked into Food and Shelter and visited with April Heiple about her dream to expand services for the homeless and hungry.
The two partnered to build a new campus for people in need. This campus included a new version of homeless services like nothing seen before in this region. The two would work together to build a village.

Gene, with his incredibly charitable heart, rallied the community behind their vision. Shortly, Gene and April would raise enough financial resources and in-kind support to build 32 cottages for individuals and families who are homeless as well as a large community center to feed those who are hungry and provide support services to help these women and men leave behind homelessness for good.

It is safe to say, Gene has built a community of giving within Norman and by example he has shown the way a community can care for people in need.

Outside of Norman, Gene has a long history of service to the State of Oklahoma serving on the Oklahoma Transportation Commission, has served on many boards and foundations and has been recognized for his philanthropy by many groups and organizations.