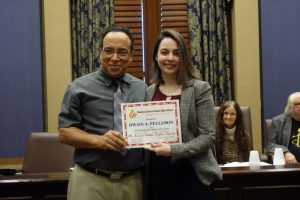 Our next award winner is a scholar, a community activist, and a licensed clinical social worker.

I learned something from this man — Dwain Pellebon – because he is a social worker and he taught in the School of Social Work at the University of Oklahoma. I learned that the code of ethics of the National Association of Social Workers echoes the words of the Universal Declaration of Human Rights.

Whenever you meet a social worker who is conscientious about their work, you can be sure that they operate with a belief in “…fundamental human rights, in the dignity and worth of the human person and in the equal rights of men and women and have determined to promote social progress and better standards of life in larger freedom.”

That is their code of ethics, their standard of behavior. It’s what we should all aspire to.

We are pleased to honor Dr. Pellebon for his work in mental health and substance abuse treatment. We’re also pleased to recognize him as a community activist who is working to create a coalition of law enforcement and community leaders to proactively reduce violence and to increase trust.

Dwain is the co-founder of Ending Violence Everywhere. He is also the elected chairperson of the Police and Community Trust Initiative.

He is a licensed clinical social worker practicing mental health and substance abuse treatment in Oklahoma City. From 1995 to 2011, he was an associate professor of social work at the University of Oklahoma, Anne and Henry Zarrow School of Social Work. In addition, he was the first ever African American hired on a Ph.D. tenure track to later achieve tenure and promotion at the school. He is a published scholar on the Black family, Afrocentricity, race and ethnic identity development, spirituality and social work, and social oppression. Dr. Pellebon chaired the Human Behavior and Diversity Committee; served as the Undergraduate Coordinator; elected to the College of Arts and Sciences (CAS) Executive Committee; Nominee for the CAS student advisor award; and, was a faculty advisor for several student organizations including returning the NAACP to the OU campus. He is currently the elected Chairperson of the Police and Community Trust Initiative (PACT) and co-founder of Ending Violence Everywhere (EVE) Oklahoma.

How does the nominee support human rights in Oklahoma?

Dr. Pellebon’s entire career and personal life in Oklahoma has dedicated time and energy to assuring human rights. He arrived to Oklahoma as a social work scholar whose Code of Ethics reflect the Universal Declaration of Human Rights. The NASW Code of Ethics is summed in one preamble quote, that all have “fundamental human rights, in the dignity and worth of the human person and in the equal rights of men and women and have determined to promote social progress and better standards of life in larger freedom.” As a social work educator, he was dedicated to the profession’s goals to assure employment rights (Article 23); an acceptable standard of health, shelter, food, and well-being (Article 25); free, high quality education (Article 26); and, the right to cultural expression (Article 27).

As Article 2 acknowledges the inclusion of all human beings to universal rights. While at OU, Dr. Pellebon worked for ethnic and gender diversity among faculty and students. He developed the core curriculum for diversity and social oppression in 1996; was the primary instructor for the core Diversity and Oppression courses; and, had chaired the Diversity Committee through 2011. He actively challenged internal resistance to diversity and inclusion, and is on record protecting junior faculty even if it required standing against the administration.

As many of the articles seek to ensure human rights through law, Dr. Pellebon was known as a “policy hawk” at the school for that very reason. Establishing fair procedures for junior faculty and students, which not only protected but demanded accountability, was on-going. Between the years of 1996 and 2010, he personally drafted the vast majority of the school’s policies for academic procedures and conduct. In addition, he was elected by university colleagues to serve on the student grievances committee and the faculty appeals board. These show his interest of assuring due process under policy.

As described in Articles 18 and 19, Dr. Pellebon debated against the imposition and/or denigration of religion as a professor teaching diversity. He openly described himself as a Christian to students, while teaching the ethical responsibility for social workers to be non-judgmental of cultural and religious differences. Though his teaching and research, Dr. Pellebon continually fought for constitutional freedoms such as equal marital rights during the time of the “Defense of Marriage Act.” In line with Articles 7 and 16, Dr. Pellebon debated an OU Law Professor on campus to fight for equal human rights in pursing marriage relationships. As a social work educator, it was important to set an example for religious students that social workers can serve God without denying the civil rights of others.

As advocated in Articles 3 and 5, humans have the right to purse life, liberty, and security without the fear of punishment and violence from government or others. Dr. Pellebon has always advocated peaceful and theory driven solutions to human problems. He is a co-founder of Ending Violence Everywhere (EVE), a coalition dedicated to reducing the rate and culture of violence in Oklahoma. He was a host on the EVE radio show addressing many issues of violence including the responsibility of the government to protect its citizens. EVE had the courage and insight to vigorously use this vehicle to warn against the significant danger posed by electing the current president. EVE knew he would reduce the safety of the most vulnerable. In addition to macro-advocacy, Dr. Pellebon participated in supporting vulnerable individuals who reached out to EVE for support in matters of abuse, fear of safety, and mistreatment by governmental institutions. He also collaborated with other organizations for basic rights. For example, he was an organizer for Senator Connie Johnson’s intervention to address unfair treatment (child removal without due process) of families by the Child Welfare system.

Article 7 calls for equal protection under the law. After the Ferguson shooting, Dr. Pellebon (along with the other EVE co-founders Sara Bana and Milton Combs, Jr.) began a small coalition with the NAACP and the Oklahoma City Police Department to create a coalition of law enforcement and community leaders to proactively reduce violence and to increase trust. This resulted in the Police and Community Trust (PACT) Initiative in 2014. According to one Stanford University observer, PACT was one of a kind in her research. Dr. Pellebon was elected as the chairperson and tasked to conceptualize the model. PACT remains active today as they are about to launch a decentralized model. Current members include the Oklahoma City, Midwest City, Lawton, and University of Oklahoma Health Sciences Center police departments; Cleveland County Sherriff’s Office; EVE, NAACP-Oklahoma City, ACLU-Oklahoma, Amnesty International-Oklahoma, YWCA-Oklahoma City, and Dream Action Oklahoma.

Finally, Dr. Pellebon tragically embodies Article 10 (equality to a fair and public hearing by an independent and impartial tribunal, in the determination of his rights and obligations and of any criminal charge against him); Article 11 (right to be presumed innocent until proved guilty according to law); and, Article 12 (arbitrary… attacks upon his honour and reputation. Everyone has the right to the protection of the law against such interference or attacks). Despite Dr. Pellebon’s career of service to human rights, his legacy was marred by some who denied basic respect after prevailing under due process of criminal law. Even his profession has, by omission, declared a legally innocent person as “guilty by allegation.” Dr. Pellebon’s family endured tremendous suffering, yet he responded by fighting for human rights through EVE and the PACT coalition. Most law enforcement and many community activists have chosen to recognize his contributions, regardless of unfounded allegations. Few have undergone the truest tests of commitment to human rights as this man. So, I am honored to nominate Dr. Dwain Pellebon as a recipient of the OKUHRA award.